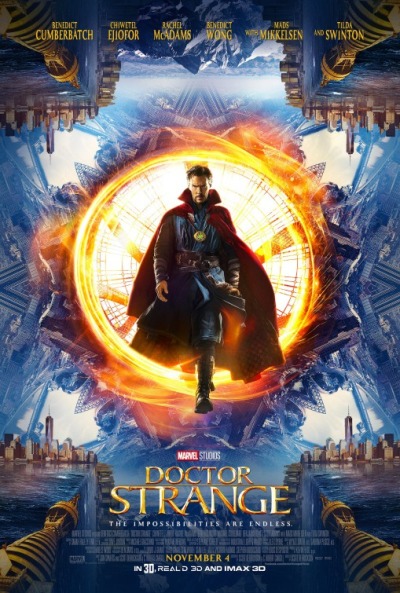 “What did you just do to me?” asks Doctor Stephen Strange.  The Ancient One responds, “I pushed your astral form out from your physical form.”  Strange asks, “What’s in that tea?  Psilocybin?  LSD?”  The Ancient One replies, “It’s just tea.  With a little honey.”

Marvel Comics has produced a vast amount of heroes and villains that are endlessly intriguing.  Dr. Stephen Strange, created by Stan Lee and Steve Ditko

in 1963, is one such character; his journey from brilliant surgeon to the Sorcerer Supreme has always fascinated me (his use of magic also helped).  I like the character so much that I actually watched the 1978 Doctor Strange TV movie/backdoor pilot back in the ’90s when the Sci-Fi Channel (now Syfy) aired it on a day with some other 1970s Marvel TV movies (it’s a decent watch).  I was

excited by the prospect of a proper big screen adaptation of the character when the lineup for Marvel Studios’ Phase Three was officially announced.  With Scott Derrickson on board to co-write and direct and Benedict Cumberbatch cast as the Sorcerer Supreme, I knew that the film would truly be magical.  I saw Derrickson’s Doctor Strange in 3D on the big screen recently, and it was an absolute blast!  I also saw it for a second time recently in 2D, and it was still an exciting experience.

2016’s Doctor Strange follows a brilliant but egotistical surgeon who, after a car accident that leaves his hands permanently damaged, travels to Nepal looking for a miracle cure.  He encounters the Ancient One, who teaches him the Mystic

Arts while a former pupil of the Ancient One threatens to unleash a dangerous threat from the Dark Dimension.  Derrickson brought together a terrific ensemble that included Cumberbatch (as Dr. Stephen Strange), Chiwetel Ejiofor (as Karl Mordo), Rachel McAdams (as Dr. Christine Palmer), Benedict Wong (as Wong), Mads Mikkelsen (as Kaecilius), Tilda Swinton (as the Ancient One), Benjamin Bratt (as Jonathan Pangborn),

Michael Stuhlbarg (as Dr. Nicodemus West), Scott Adkins (as Lucian), and a cameo by Chris Hemsworth (as Thor).  Cumberbatch astounds as the Sorcerer Supreme-in-training, nailing the incredible arrogance early on as well as the eventual humbleness and leadership he takes on.  Ejiofor is impressive as a fellow sorceror who is steadfast in his

beliefs and a reliable ally to Strange.  McAdams shines as Strange’s emotional rock and fellow gifted doctor.  Wong is also strong as the new librarian of the Ancient One’s books on the mystic arts (he also provides some of the film’s best comic moments).  Mikkelsen makes for an interesting villain in which his misguided beliefs lead him down a dark path, and Swinton is mysterious, commanding, and ethereal as the Ancient One.

tone of the film, and Charles Wood’s production design is immense (with sets ranging from Nepal to Hong Kong to New York to the Dark Dimension, the New York Sanctum stands out as my personal favorite).  Alexandra Byrne’s costume designs are modern yet faithful to the comics, and the editing by Wyatt Smith and Sabrina Plisco moves the film along at a good pace.  The special effects are truly amazing (and quite trippy at times; they make Inception‘s trippy visuals look like a normal carousel ride).  Michael Giacchino delivers an excellent score that highlights the drama and intense action and is dominated by a memorable theme for the title character.  Derrickson’s Doctor Strange is another successful entry in the Marvel Cinematic Universe, one that establishes a new hero as well as goes deeper into magical elements that will eventually culminate with the next Avengers film.  Its combination of excellent performances, visuals, and music make Doctor Strange a must-see for both comic and non-comic book fans alike.