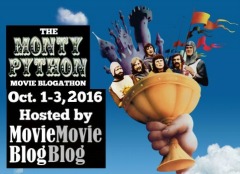 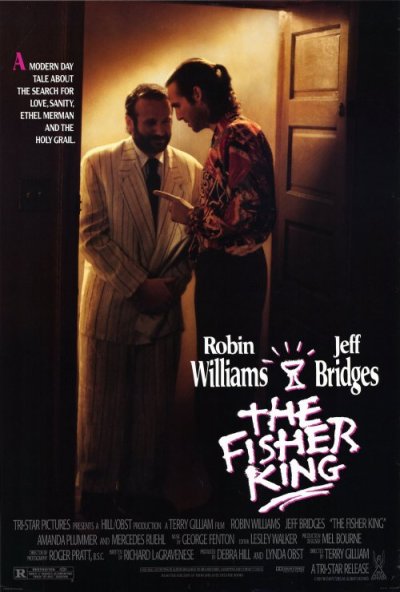 “I don’t mean to be flippant or to enrage you or anything, but you’re a psychotic man,” says Jack Lucas.  Parry says, “I know.”  Jack responds, “A very nice psychotic man.”  Parry replies, “Thank you.”

After having made the critically acclaimed but huge box office flop The Adventures of Baron Munchausen, Terry Gilliam opted for a smaller-scaled

project for his directorial follow-up due to his wanting to make other kinds of films besides special effects-heavy films.  He struck gold when he came upon the screenplay for a modern dramedy with some fantastical elements.  I remember being mesmerized by the TV spots for this film when it first came to theaters and had always wanted to see it.  12 years later, I would finally get to see Gilliam’s The Fisher King on the big screen (in

Central Park!) as part of the 2003 Central Park Film Festival, where it was introduced by screenwriter Richard LaGravenese (who shared some interesting stories).  It was such a funny and intense film to experience appropriately in Central Park (which is almost another character in the film).  This review of The Fisher King is my entry in the Monty Python Movie Blogathon hosted by Movie Movie Blog Blog.

performance as a homeless man with a tragic past who’s on a quest to find the Holy Grail.  Bridges is also strong in one of his best performances as a former shock jock who seeks redemption after being saved by Parry.  Best Supporting Actress Oscar winner Ruehl is a scene stealer as Jack’s girlfriend and voice of reason, and Plummer shines as the object of Parry’s affections.

The Oscar-nominated screenplay by LaGravenese explores the themes of loss, forgiveness, love, and redemption.  It also balances the humor with the drama as

well as some of the story’s more fantastical elements.  The Oscar-nominated production design by Mel Bourne and Cindy Carr makes creative use of real life locations (especially Central Park; I also liked the sets for the video store and Parry’s “home”), and Roger Pratt’s cinematography reflects the tone of the film.  Leslie Walker’s editing keeps the film moving at a good pace, and George Fenton delivers an Oscar-nominated score that is both somewhat adventurous and

somber.  Gilliam’s The Fisher King is an Oscar-winning gem featuring standout performances and a gripping narrative deftly handled by the director of Time Bandits and Brazil (the red knight sequences are among my favorites, and an important flashback sequence involving Parry helps keep the film grounded in reality).  It has held up well over the last 25 years, and will continue to do so.