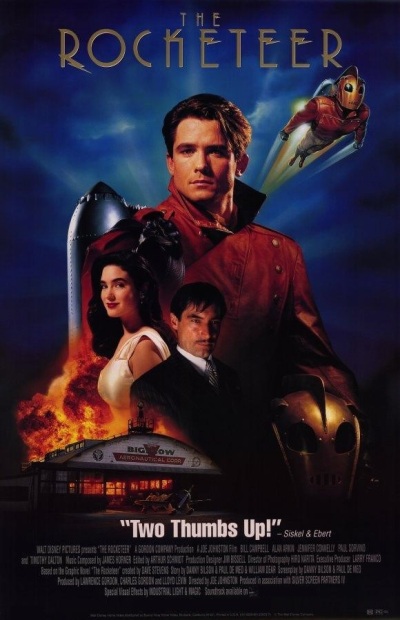 “You got a good thing goin’ on with that girl, Clifford.  And I’m tellin’ you right now, if she flies the coop, it’s gonna be your fault,” says Peevy.  Cliff Secord responds, “Aw, what do you know about women, Peev?  You haven’t had a date since 1932.”

The comic book character known as the Rocketeer was created in 1982 by Dave Stevens as an homage to the Saturday matinee serial heroes of the 1930s, 1940s,

and 1950s (serials such as King of the Rocket Men and Commando Cody).  Stevens soon sold the film rights but the film would take a very long time to develop, even when Disney came on board to make the film.  Despite the battles between director Joe Johnston and the Disney executives (including the one where Disney tried to change the iconic helmet design and the clash over casting the main lead),

Johnston got to make the film he wanted to make.  I saw The Rocketeer during its original theatrical run 25 years ago, and it was an amazing experience (it was one of the few movies that I got to see on the big screen when I was a kid).  This review of The Rocketeer is my entry in the Remembering James Horner Blogathon hosted by Film Music Central.

1991’s The Rocketeer follows a young stunt pilot in 1938 as he discovers a rocket jet pack in a field and uses it to perform flying stunts in air shows and acts of heroism, unaware that both Nazi agents and the FBI are looking to recover it

Polito (as Otis Bigelow), Ed Lauter (as Fitch), James Handy (as “Wooly” Wolinski), William Sanderson (as Skeets), Margo Martindale (as Millie), Tiny Ron Taylor (as Lothar), and Melora Hardin (as South Seas Singer).  Campbell brings charm and courage to the unlikely hero known as the Rocketeer.  Connelly is a knockout as Cliff’s girlfriend, an aspiring actress who is no mere damsel in distress.  Dalton is

dashing yet wonderfully villainous as the Errol Flynn-type actor who’s plotting the recovery of the rocket pack for Nazi Germany.  Arkin brings a lot of humor to Cliff’s friend Peevy, who himself is quite the technical genius.  Sorvino is memorable as a surprisingly patriotic gangster, and O’Quinn shines as a fictional version of the real-life Hughes.

cinematography reflects both the light and dark tones of  the film, while James D. Bissell’s production design deftly utilizes real locations to recreate 1930s Los Angeles.  Rick Baker’s Rondo Hatton-inspired makeup work for the character Lothar is top-notch, and the costume designs by Marilyn Vance are faithful to the period as well as the comics.  The special effects are amazing (particularly the flying scenes), and Arthur Schmidt’s editing moves the film at a