“What you’re going to see are the designs and pictures and stories that music inspired in the minds and imaginations of a group of artists.  In other words, these are not going to be the interpretations of trained musicians, which I think is all to the good,” says the Narrator.

The Sorcerer’s Apprentice originated as a symphonic poem composed by Paul Dukas in the late 1890s.  By 1936, the popularity of Mickey Mouse was starting

to decline, so Walt Disney decided to produce an animated short set to the music of The Sorcerer’s Apprentice and featuring Mickey Mouse.  Production costs on the short grew too expensive, however, and it was decided to include the short in a feature film that would also include other segments set to classical music.  The resulting film, Fantasia, would become a landmark film and ultimately a Disney classic.  For years I had wanted to see it,

and I finally got a chance to see it on the big screen almost a year ago at the Museum of Modern Art in an old Technicolor print.  I got to see Fantasia on the big screen for a second time a few months ago at one of the 75th anniversary screenings showcasing a digitally restored version, and it looked amazing (I can say for sure that the film lived up to the hype).  This review of Fantasia is my entry in the Classic Movie Ice Cream Social Blogathon hosted by Movies Silently.

Ben Sharpsteen supervised the production and directing for the film.  There are eight sequences in the film: Toccata and Fugue In D Minor (directed by Samuel

The Toccata and Fugue In D Minor sequence features music by Johann Sebastian Bach and showcases interpretive animation that creates surreal imagery.  The Nutcracker Suite segment features music by Pyotr Ilyich Tchaikovsky and shows fairies at home in nature.  The flower petals turning upside down into dancing dresses were cool to watch, and the snowflakes were quite hallucinatory.  The Sorcerer’s Apprentice, with music

by Paul Dukas, was my favorite segment; it was fun to see Mickey Mouse in the most memorable part of the film.  The use of animated shadows and fireplace lighting was very impressive.  The Rite of Spring sequence features music by Igor Stravinsky and shows a visual history of Earth’s beginnings all the way through the extinction of the dinosaurs (it includes some cool dinosaur battles).

After the intermission is Meet the Soundtrack, which showcases a jam session and an animated sequence on how sound is used (a soundtrack character changes shape based on the melodies being played).  The Pastoral Symphony 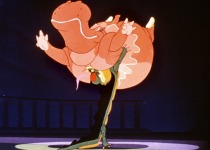 spirits from their graves (the imagery and cinematography are both frightening and surreal).  It is also worth noting that the sequence plays two pieces of music that are complete opposites of each other when played back-to-back (the sinister music of Night On Bald Mountain by Modest Mussorgsky transitions to the religious music of Ave Maria by Franz Schubert as night becomes dawn; oddly enough, the transition is harmonious).

The live action Technicolor cinematography by James Wong Howe is also astounding, utilizing reds, blues, and yellows quite gorgeously.  Fantasia is a 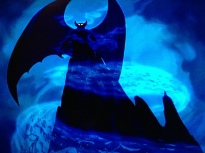 Disney animated classic that has held up very well for more than 75 years.  Its animation is superb and its music is engaging and beautiful.  It would receive an underrated but very worthy sequel nearly 60 years later, Fantasia 2000, but the original is still the best.  Its combination of beautiful animation and superb classical music (conducted by Leopold Stokowski) always brings a smile to my face and can brighten up anyone’s day.