“If you lose this war, don’t blame me!” yells Johnnie Gray at the recruiter who rejected him.

Buster Keaton is one of the greatest silent filmmakers of all time.  He is responsible for some of the best silent film comedies, including Three Ages, Our 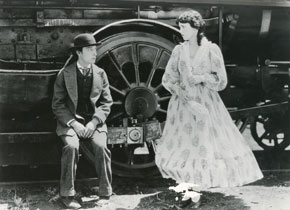 Hospitality, Go West, and Battling Butler.  He is also responsible for perhaps the greatest silent film comedy of all time, The General.  It is with great irony that Keaton’s most famous film would be the one that cost him his independence as a filmmaker due to its box office failure (it didn’t help that the film had one of the largest budgets of the silent film era).  I first saw it in a film class during my first year of college and was amazed at the

work it took to bring the film to life.  I had hoped to see it on the big screen one day, and was lucky enough to catch an 85th anniversary screening of The General at Film Forum five years ago as part of a mini-Keaton retrospective (it was accompanied by a piano score performed by Steve Sterner and preceded by the 1922 Keaton short The Blacksmith).  This 90th anniversary review of The General is my entry in the Second Annual Buster Keaton Blogathon hosted by Silent-ology.

1926’s The General follows a Southern railroad engineer who attempts to rescue his former fiancée, who has been kidnapped aboard his train by Union spies during the Civil War.  Keaton and co-director Clyde Bruckman brought together

an effective cast that included Keaton (as Johnnie Gray), Marion Mack (as Annabelle Lee), Glen Cavender (as Union Captain Anderson), Jim Farley (as General Thatcher), Charles Henry Smith (as Annabelle’s father), and Frank Barnes (as Annabelle’s brother).  Keaton is the main attraction here as he delivers a phenomenal performance as a Southerner looking to prove himself to his fiancée’s family after being rejected for Confederate military service due to his valuable skills as a railroad engineer.  Keaton also performs his own

dangerous stunts in the film (most of which take place on a moving train; examples include sitting on a cow-catcher while holding a railroad tie, jumping from an engine car to a tender car to a boxcar, and running along the roof of a train).  Mack also shines as Johnnie’s fiancée, who inadvertently becomes a prisoner of Union soldiers during their heist of Johnnie’s train, the General (prompting Johnnie to make a most dangerous rescue attempt).

The screenplay by Bruckman, Keaton, and Al Brasberg mixes comedic gags and suspenseful action (it was also based on the memoir The Great Locomotive

Chase by William Pittenger, which recounted a real-life military raid in 1862 that saw Union army volunteers commandeer a train in northern Georgia and take it north towards Tennessee while being pursued by Confederate forces).  Keaton and Bruckman draw strong performances from the cast while staging exciting stunts (the collapse of the bridge and subsequent train wreck was the

most expensive sequence in all of silent cinema).  The cinematography by Bert Haines and Devereaux Jennings makes great use of the natural light and looks gorgeous.  Keaton and Bruckman’s The General is an enduring silent film classic that has entertained audiences for generations.  It is an impressive film no matter how many times you see it, and is one that Keaton had every right to be proud of.

Girls Do Film
Head In A Vice
Outspoken and Freckled

for those who like their movie reviews short and sweet