“The real Santa was totally different.  The Coca-Cola Santa is just a hoax,” says Pietari Kontio.

There have been many films involving the mythical holiday figure Santa Claus, ranging from the original classic Miracle On 34th Street to the awful Santa Claus Conquers the Martians to more recent films like The Santa Clause, Elf,

The Polar Express, and Arthur Christmas.  Different aspects of the most popular version of Santa comes from a variety of sources, but there are other versions of Santa in different cultures.  The original Finnish version is called Joulupukki, a demonic, horned goat-man who made the rounds during Christmas to kidnap and torture bad children.  In 2003, Finnish filmmaker Jelmari Helander was inspired to make a short film called Rare 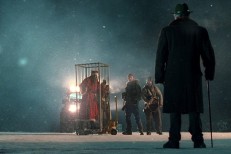 Exports Inc., which centered on a trio of hunters who were searching the wilderness in northern Finland for a wild Santa Claus.  The success of the short led to a sequel short, The Official Rare Exports Inc. Safety Instructions, as well as the idea of creating a feature-length Rare Exports film.  I was lucky enough to catch a showing of Helander’s Rare Exports: A Christmas Tale at the IFC Center over five years, and it was quite an interesting experience.

2010’s Rare Exports: A Christmas Tale centers on a group of reindeer herders in Finland who, in the wake of the unexplained killing of their reindeer and

kidnapping of most of the town’s children, capture what they believe to be the real Santa Claus on Christmas Eve.  However, in an attempt to sell him in order to cover their losses, they discover that he is one of hundreds of elves who are trying to free the real original Santa Claus (one who punishes the naughty rather than reward the good).  Helander assembled a fine cast that includes Onni Tommila (as Pietari Kontio), Jorma Tommila (as Rauno Kontio), Tommi Korpela (as Aimo), Rauno

Juvonen (as Piiparinen), Per Christian Ellefsen (as Riley), Ilmari Jarvenpaa (as Juuso), Peeter Jakobi (as Pietari’s Elf), and Jonathan Hutchings (as Brian Greene).  Onni and Jorma Tommila shine as the young Pietari and his father Rauno, giving the film’s best and most engaging performances (their chemistry).

Helander’s screenplay feels inspired by the horror films of the 1980s that featured young protagonists (the story is told largely from Pietari’s perspective) in addition to Finnish folklore and is loaded with dark humor.

Helander also stages some excellent action set pieces in the second half of the film, and his production design makes great use of the desolate, remote Finnish landscape.  Mika Orasmaa’s cinematography gives the film an eerie look, especially combined with the harsh, snowy landscape (which is reminiscent of John Carpenter’s The Thing) and the score by Juri and Miska Seppa.  Kimmo Taavila’s editing keeps the film moving at a great pace, never allowing the sense

of dread to dissipate.  Salla Yli-Luopa’s makeup design creates similar yet distinctive, grimy Santa looks for Santa’s elves.  Helander’s Rare Exports: A Christmas Tale is the best Christmas horror film in years, filled with humorous performances, an atmosphere full of dread, and a story that takes full advantage of an old Santa Claus myth, resulting in a bizarrely entertaining film.