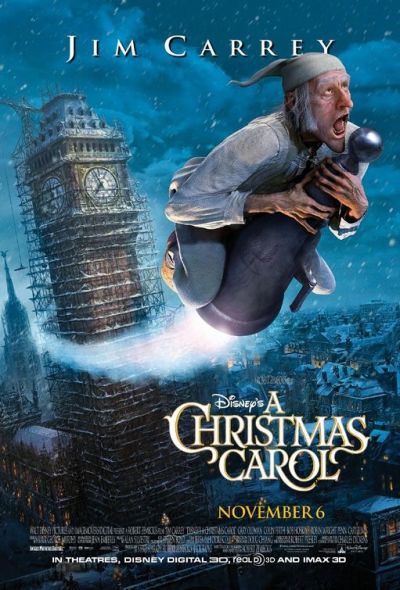 “What do you want with me?” asks Ebenezer Scrooge.  Jacob Marley replies, “You will be haunted by three spirits.”  Scrooge responds, “I’d rather not.”

There have been several feature-length adaptations of Charles Dickens’ classic story A Christmas Carol.  The most popular version is the 1951 version with Alastair Sim in his incredible performance as Ebenezer Scrooge, while the most faithful adaptation is (somewhat surprisingly) the 2009 motion capture

computer-animated version with Jim Carrey as Scrooge (along with a few other characters).  I was really excited when I found out that Robert Zemeckis chose to make his own version of Dickens’ tale after having made 2004’s The Polar Express and 2007’s Beowulf using the motion capture process.  Having Carrey in the lead role also piqued my interest.  I got to see the film twice in 3D during its original theatrical release five years ago, and I enjoyed it very much.

2009’s A Christmas Carol centers on the miserly Ebenezer Scrooge, who is visited on Christmas Eve by three Christmas spirits who attempt to help him change his bitter ways before he is condemned to an afterlife of eternal pain and

Bob Hoskins (as Fezziwig and Old Joe), and Fionnula Flanagan (as Mrs. Dilber).  Carrey brings plenty of diversity to his four roles and especially nails Scrooge.  His Ghost of Christmas Past may be the strangest creation, made more eerie by the realization that the Ghost of Christmas Past is the Carrey-performed character that looks the most like Carrey (at least facially).

Zemeckis’ direction is solid; his adaptation of Dickens’ novel, as previously mentioned, is the most faithful adaptation ever (although he does add an exciting carriage chase in the second half of the film).  By utilizing computer

animation, he’s able to bring to life aspects of the novel that had never been present in other cinematic adaptations (either due to budget or technological limitations at the time they were made).  Robert Presley’s cinematography was hauntingly beautiful, making use of natural light sources such as sunlight, candles, fireplaces, etc.  Doug Chiang’s production design was

incredible, capturing Victorian London perfectly (I liked the Ghost of Christmas Present sequence best).  Jeremiah O’Driscoll’s editing keeps the film moving at an excellent pace.  The computer animation was spectacular (it looked even better in 3D!), as were the costume designs.  Alan Silvestri provides another terrific Christmas-themed score, magically weaving new themes with holiday classics.  I also liked the end credits song God Bless Us Everyone performed by Andrea Bocelli.

Interestingly, the so-called controversy surrounding the motion capture process (which had been slowly building for a few years) greatly increased after the release of this film (and especially James Cameron’s Avatar).  A new Oscar rule

was added to the Best Animated Feature category, which basically declared that animated films using the motion capture process would be deemed ineligible (some members of the Academy also feared that a studio would submit a live action film that heavily used the motion capture process for Best Animated Feature).  Despite that, Zemeckis’ take on A Christmas Carol is a worthwhile experience and not one to be missed.  Merry Christmas everyone!