Prior to entering the Javits Center on Saturday October 12th, there was a flea market nearby and I stopped by a comics section.  To my surprise, I found issues #1, 2, and 3 of the comic adaptation for the 1988 film Willow (still in excellent 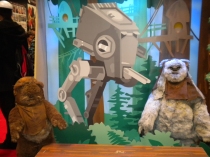 condition) and paid $9 for all three issues.  Afterward, I continued to the Javits Center for my second day of the 2013 NY Comic Con.  Once inside, I browsed through the various booths.  At the Cinedigm booth, I bought a Blu-ray copy of Studio Ghibli’s From Up On Poppy Hill and received a free poster for that film as well.  At one of the booths selling older collectibles, I bought a cup from 2009’s Star Trek (it had an image of Chris Pine as Captain James T. Kirk as well as the then-new U.S.S. Enterprise).  What was interesting about this cup was that the year marked on it was 2008 (it was probably manufactured back when the film’s original release date was Christmas 2008).  I stopped by the IFC Midnight table and picked up a

free 3D lenticular postcard for Dario Argento’s Dracula 3D (an item that I was not able to acquire the day before).  Later in the day, I stumbled upon the Reinventing Films booth, where Tyler Mane happened to be signing free copies of Prey, a comic book featuring a character he’ll be playing in an upcoming film (which is currently raising funds).  I got a copy of the comic and got it signed by Tyler Mane.  I told him that he was terrific in X-Men and Troy, and he was kind enough to pose for a picture with me.

During the day, I bumped into my friends Jen and Val, members of the NYC Rocky Horror Picture Show floor cast, who were at the booth for the Rocky Horror Saved My Life: A Fan Documentary Kickstarter campaign (which I

eventually made a pledge to here).  Later, I bought an advanced Blu-ray copy of 2003’s Oldboy at the Tartan booth.  At the Glass Eye Pix booth, I bought a Blu-ray copy of 2011’s The Innkeepers.  I also picked up a free Wendigo postcard and got it signed by director Larry Fessenden, who happened to be at the booth.  I asked him about the scene he was in for the movie You’re Next.  He said that it took about a week to shoot his stuff, and that Lionsgate flew him out to do some pick-up shots (which totaled four seconds) two years after the movie was shot.  He noted that the amount of money spent on flying him in and doing the pick-up shots cost more than the film’s original

budget.  At the Stan Lee Collectibles booth, I met famous cosplayer Ivy Doomkitty.  The guy who I asked to take a picture of me with Ivy took his time to figure out how to take the picture (even after being told how to).  At one point, he apologized for taking so long, and I immediately responded, “Don’t worry; there’s no rush.”  Ivy giggled since we were standing tightly next to each other, and I enjoyed every second of it.  I thanked her afterward, of course.

Another thing I checked out was the Neil DeGrasse Tyson section, where a preview of a new planetarium show at the Museum of Natural History was going

to take place (it was pretty neat).  I also checked out the Walking Dead Chop Shop.  I had my NY Comic Con badge scanned to receive a free Walking Dead Chop Shop button, and then I got on line to get my picture taken with a Walking Dead vehicle (it had a machine gun mounted on top).  Once it was my turn, I got to go inside of the vehicle and then stand through the hole in the ceiling to “operate” the machine gun (the picture that was taken wasn’t bad, but I was disappointed that the photographer didn’t

let me do the action pose that I wanted to do).  Afterward, I was able to get the photo of me printed as well as e-mailed to me.  One of the last booths I checked out was the Marvel booth, where I picked up a free Thor comic.  The one panel that I really wanted to attend that day was the Superman 75th Anniversary panel, but there were too many people there and I couldn’t get in.

My day was pretty much checking out booths and taking pictures (especially cosplay ones).  I wasn’t demanding when I asked a female cosplayer if I could take a picture of her (or have my picture taken with her).  They were very nice and I was thankful for the pictures.  I was bothered that some other amateur photographers were quite demanding, insisting on various poses from one female cosplayer at a time.  I was grateful just to get one picture; these guys wanted multiple pics of each cosplayer.  They walked around with professional-looking cameras hanging from their necks; I remember a giant fat white guy with 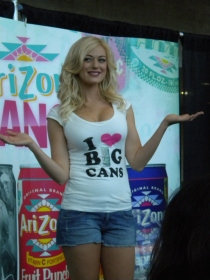 a book bag and a short, older black guy being among these demanding amateur photographers.  I was kind of creeped out after a while by these guys; I remember seeing one female cosplayer who started to look noticeable uncomfortable after the first few poses.  These guys weren’t paying them for a photo shoot, so I didn’t understand why they were treating them this way (I later heard some reports about some cosplayers being harassed by a fake TV camera crew).  I give a lot of credit to the ladies who show up in costume at these conventions and am grateful they are nice enough to allow people to photograph them.  My advice to my fellow amateur photographers: Don’t be demanding and be grateful for the pictures you do get.  Overall, I had a great day.  I was too tired to attend on Sunday October 13th (my feet were killing me), but I was content with the two days that I did attend and felt that I had gotten more than my money’s worth.  NY Comic Con 2013 was a satisfying experience, and I’m looking forward to 2014!

Your eyes aren’t deceiving you. That’s Ernie Hudson (aka Winston Zeddemore) back in his Ghostbusters uniform and the Stay Puft Marshmallow Man.