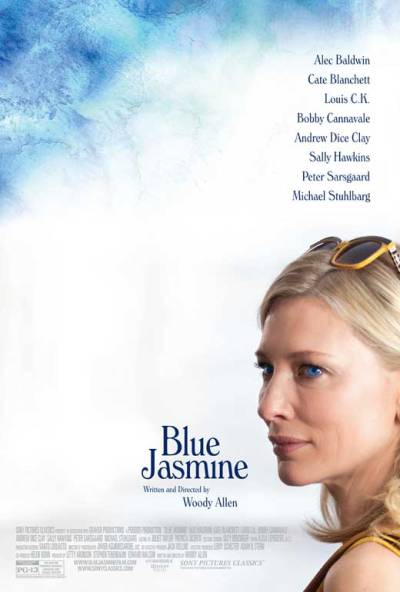 “Anxiety, nightmares and a nervous breakdown; there’s only so many traumas a person can withstand until they take to the streets and start screaming,” says Jasmine Francis to her nephews.

Woody Allen is such a fascinating filmmaker.  He’s made many great comedy classics and remains highly prolific (I couldn’t say when was the last year that didn’t have a Woody Allen release without looking it up).  His last film, 2012’s To Rome With Love, was very disappointing (overall and not just compared to his

past work).  This year’s release is Blue Jasmine, a film I had high hopes for.  It features a subject that is still topical and relevant, and of course there was strong buzz for Cate Blanchett’s performance.  I haven’t had much luck in getting to see Woody Allen’s films on the big screen; I’ve gotten to see 1977’s Annie Hall three times, 1979’s Manhattan once, 2008’s Vicky Cristina Barcelona once, and 2011’s Midnight In Paris twice.  Now, I can add 2013’s Blue Jasmine to this list.

showered her with riches while cheating on her and swindling millions of dollars from unsuspecting investors.  Left for broke, Jasmine leaves New York and moves in with her blue collar adopted sister in San Francisco.  While attempting to rebuild her life, Jasmine encounters an assorted group of characters while dealing with anxiety and the possibility of another nervous breakdown.  Blanchett gives the best performance of the summer of any actress or actor (rivaled only by Barbara Sukowa, who was phenomenal as the title character

in Margarethe Von Trotta’s biopic Hannah Arendt).  Blanchett manages to create sympathy for someone who is nearly unlikeable.  In all fairness, it’s hard to dislike and/or condemn a woman whose biggest flaw is being too trusting of her husband, but admittedly it’s amazing to see how naive she was during her marriage (shown in flashbacks).

Rounding out the cast is Alec Baldwin (as her husband Hal), Sally Hawkins (as her adopted sister Ginger), Bobby Cannavale (as Ginger’s boyfriend Chili),

Andrew Dice Clay (as Ginger’s ex-husband Augie), Louis C.K. (as Al, a stereo installer), Michael Stuhlbarg (as Dr. Flicker, a dentist), Peter Sarsgaard (as Dwight, an aspiring Congressman), Alden Ehrenreich (as Danny, Hal’s son from a previous marriage), and Max Casella (as Eddie, a friend of Chili’s).  I was surprised at which male characters displayed parts of Woody Allen’s personality.  The most obvious was Dr. Flicker, who behaved and practically looked like a young Woody Allen (right down to the hair and glasses).  Then

there’s Al, whose yammering with Ginger was reminiscent of Allen.  Finally, there’s Hal, who in one of the flashbacks reveals that he’s in love with a teenage girl (the single trait he shares with Allen).  Clay was a welcome surprise as the still-resentful Augie, who lost his lottery winnings and his dream of starting his own business because of Hal.  I hope audiences get to see more of him in the near future (in good roles, of course).

I’m surprised that Woody Allen still has the energy to release one film a year.  He hasn’t made a lot of duds (although the majority of them have come in the last decade).  The bottom line is that this film is certainly no dud, and Allen may

be looking at another Screenplay Oscar nod.  Blanchett will most likely earn a deserved Best Actress nod, Hawkins a Supporting Actress nod for her terrific performance, and possibly a Supporting Actor nod for either Cannavale and/or Clay (it’s too early to tell but fun to speculate).  Blue Jasmine has many comedic moments, but its the unexpectedly chilling finale that will catch you off guard and leave you astonished.  After all these years, Woody Allen can still manage to surprise us (in a good way).  Bravo.