One of the reasons I decided to visit Georgia recently was to see the Center For Puppetry Arts in Atlanta.  It wasn’t until I visited the Center that I found out that this year was its 35th anniversary.  The main attraction there right now is a Jim Henson exhibition.  A number of items from various Jim Henson productions over the years were on display, ranging from puppets such as Big Bird and Sherlock Hemlock (Sesame Street), Red and Mokey Fraggle (Fraggle Rock), Ma and Emmet Otter (Emmet Otter’s Jug-Band Christmas), Sir Didymus, the Four Guards, and the Shaft of Hands (Labyrinth), and Kermit the Frog and Dr. Teeth (The Muppet Show).

There was a large section dedicated to his 1986 cult classic Labyrinth, which included some props from Sarah’s room in addition to the puppets already mentioned.  There was also a special room called the Jim Henson Wing, which showcased the section Jim Henson: Puppeteer (it displayed some of the puppets that Henson had performed with over the years).  It was a preview of the upcoming expansion of the Jim Henson Wing that will open in 2014.  In there was also a video wall that displayed a montage of clips and photos from various Jim Henson productions (including 1979’s The Muppet Movie and 1982’s The Dark Crystal).  In the Puppets: The Power and Wonder exhibit, an entire history of various forms of puppets from all over the world were on display.  Naturally, my favorites were the Skeksis (The Dark Crystal) and Fishface (Labyrinth).

Overall, it’s a really cool place to visit.  They also do puppet shows and an occasional film screening.  I strongly recommend visiting this place if you’re in the area or if you’re a Jim Henson fan.  I took 70 pictures in total during my visit, but I’ve only included nine in the slideshow below because I want people to go see the exhibits in person.  Enjoy! 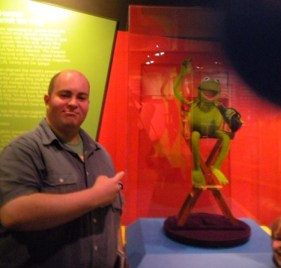 No, there’s nothing wrong with your eyesight.  You are indeed seeing a picture of me with the legendary Kermit the Frog.  And just to be clear, that is my index finger pointing to him and not my middle finger.

2 responses to “Center For Puppetry Arts”