the world’s largest film production and distribution company (which was based in France).  In 1921, he and his brother Max founded Inkwell Studios (which was renamed the Fleischer Studios in 1929), and Paramount Pictures would serve as the distributor and parent company for them.  They produced a number of successful animated shorts, including ones for such characters as Betty Boop, Popeye, and Superman.  For this installment of Animation Corner, I’ll be taking a look back at his two feature-length directorial efforts, Gulliver’s Travels and Hoppity Goes To Town.

Directed by Fleischer, 1939’s Gulliver’s Travels centers on a man who washes up ashore and encounters the tiny kingdom of Lilliput.  He must help prevent a war

between that kingdom and Blefuscu, another tiny kingdom, as well as assist in the romance between Prince David of Blefuscu and Princess Glory of Lilliput.  Featuring the voices of Sam Parker, Pinto Colvig, Jack Mercer, Tedd Pierce, Jessica Dragonette, and Lanny Ross, this critically acclaimed cel-animated film was a box office success.  Based on the novel by Jonathan Swift, Paramount had the film made as an answer to Walt Disney’s 1937 production of Snow White and the Seven Dwarfs, which enjoyed critical and box office success.  It was Paramount’s first animated feature film, as well as the first American feature

film not made by Disney.  For the character of Gulliver, the Fleischers employed the technique of rotoscoping (which Max had created in 1915).  This is also the first animated film in which the actors’ voices are credited.  Among the film’s accolades are two Academy Award nominations for Best Original Song and Best Original Score (it lost to The Wizard of Oz in both categories).

Directed by Fleischer, 1941’s Hoppity Goes To Town centers on a grasshopper who returns to Bugville to discover that a skyscraper is going to be built by humans over the (very) small town and tries to help save it.  Featuring the voices of Kenny Gardner,

Gwen Williams, Jack Mercer, Tedd Pierce, Carl Meyer, Stan Freed, and Pauline Loth, this critically acclaimed film had cost a little over $700,000 to make but flopped at the box office.  This was largely due to being released on December 5, 1941, two days before the Japanese attack on Pearl Harbor (its original release date was in November, but Paramount moved it to December when Disney’s release of Dumbo became a box office hit in October of that year).  The film had started out as an adaptation of Maurice Maeterlinck’s The Life of the Bee, but the Fleischers were unable to get the rights to the book, and  instead opted to create a story that was inspired by The Life of the Bee.  The Fleischer Studios were deeply in debt due to the expense of making the film as well as the Superman animated shorts (which were expensive to make).  Dave and Max 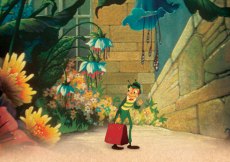 (who were growing apart) sold the studio in May 1941 to Paramount, who allowed them to stay in production.  The box office failure of Hoppity Goes To Town led to the ousting of the Fleischer brothers from the studio they had founded (Paramount renamed it Famous Studios).  The film was initially released as Mr. Bug Goes To Town, then re-released as Hoppity Goes to Town in the hopes of making its money back, but it only grossed $241,000 by 1946 (Legend Films retitled it Bugville for its restored DVD release in 2008).  The film has since become a cult classic.