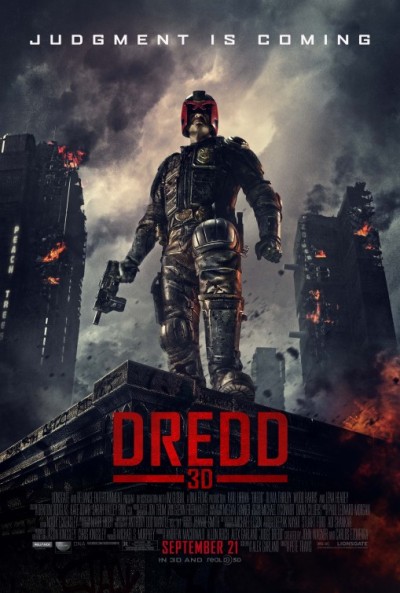 “Ma-Ma’s not the law.  I am the law,” says Judge Dredd over the PA system.

I will start off immediately by pleading guilty to not having actually read any of the Judge Dredd comics (I know, it’s a serious crime).  My main exposure to the character has been the awful 1995 Hollywood adaptation starring Sylvester Stallone.  I will not make my gripes about that film here (I’ll save that for another time).  What I will say about that film is that it showed future filmmakers how NOT to make a Judge Dredd movie, and 17 years after its release, we finally have a proper film adaptation of the character (thankfully not made by Hollywood).

Karl Urban stars as Judge Dredd, one of many judges (basically cops who are also judge, jury, and, if necessary, executioner) in Mega City One but regarded as the best.  He is assigned by the Chief Judge to road test a rookie Judge, Cassandra Anderson (Olivia Thirlby), who is also a psychic.  The two Judges head to the notorious Peach Trees mega-block, a 200-story vertical slum run by the extreme Ma-Ma clan, for a triple homicide.  When the Judges arrest one of Ma-Ma’s chief henchmen for the distribution of the new drug called Slo-Mo and attempt to bring him in for interrogation, Ma-Ma (Lena Heady) has the building shut down and decrees over the PA system that she will free it once the two Judges have been killed.

Karl Urban completely owns the role of Dredd.  He completely embodies the essence of the character, even down to never showing most of his face.  In the comics, the reason for that is because Dredd is the personification of the law (which has no face) and, to a lesser extent, the soullessness of justice (something that the 1995 version ignored).  This new version understands that concept and executes it to perfection.  No matter what he goes through, Urban’s Dredd just treats it like another day at the office.  Seemingly big events can be simplified to: “Drug bust.  Perps were uncooperative.”  Urban doesn’t try to use any catchphrases for Dredd (unlike the Stallone version).  Even when he says, “I am the law,” he doesn’t shout it as a hammy catchphrase; his delivery of the line is soft-spoken and calm (but still with a hint of anger).  He doesn’t need to shout it because he already knows he is the law and his belief of that is unshaken.  His Dredd is a brooding force to be reckoned with, but one that masks a layer of complexity on the inside (something that is hinted at when Anderson psychically reads him before she is introduced to him by the Chief Judge).

Olivia Thirlby also shines as Anderson, the psychic who’s looking to make a difference by becoming a judge.  Thirlby brings the right amount of pathos to a woman who is haunted by her past and conflicted about whether or not she should embrace the path she’s chosen for herself.  Anderson is under evaluation because she was three points shy of passing her exam to become a judge, but was given another shot due to her psychic abilities.  Thirlby steps up to the role nicely, demonstrating how tough Anderson can be without resorting to a damsel-in-distress cliche (and thankfully doesn’t become a love interest).

Lena Heady is outstanding as the villainous Ma-Ma.  Her Ma-Ma can be so unrelenting and unremorseful (despite being an ex-hooker whose face was once slashed by her now ex-pimp) that she makes for an even more terrifying villain than Armand Assante’s Rico from the 1995 Hollywood adaptation.  She rules through absolute fear, a fear so powerful that a number of times she is physically vulnerable but no one dares attempt to take her out (except for Dredd).  While her past might create some sympathy for her, her crimes, however, are unjustifiable and make her ripe for judgment.

In addition to a terrific cast, Paul Leonard-Morgan did a great job with the score, as did Anthony Dod Mantle with the cinematography.  Mark Digby’s production design successfully grounds the film in a realistic-looking futuristic setting.  Diana Cilliers and Michael O’Connor’s costume designs are believable-looking in the context of the world of the film (particularly the judges’ uniforms, which actually look like judges’ uniforms and not costumes).  Finally, credit must be given to Alex Garland for writing an excellent adaptation of the Judge Dredd comics and Pete Travis for his terrific directing.

I feel it was unfair that some reviewers compared this film to Gareth Evans’ The Raid: Redemption.  If anything, Dredd owes more to 1987’s Robocop and 1988’s Die Hard.  Please note that this does not lessen the film; it is still a very strong film that deserved a much better box office performance in the U.S. (I’m sure it had something to do with people’s memories of the Stallone version).  Please go and see this film if it’s still playing in a theater near you.  It’s really worth it.