I decided to come in a little later yesterday than I did on Friday to avoid waiting on long lines.  Once I came in, I immediately went to the line for the IGN theater for The Dark Knight Returns Part 2 panel.  After waiting about 40 minutes, I rushed in to get a seat as close to the front as possible.  After the panel, I stayed for the panel for The Conjuring, a new supernatural thriller from director James Wan (Saw, Insidious) and starring Patrick Wilson.  After that panel, I stayed for the panel for The Bay, the latest Barry Levinson film.  After that panel was the one for Beautiful Creatures, the latest Richard LaGravenese film that’s apparently based on a succesful book franchise (I had never even heard of it until today).  After that panel was the one for the remake of Carrie, featuring Julianne Moore and Chloe Grace Moretz.  Following that panel was the one I was most excited to attend: the Evil Dead panel. 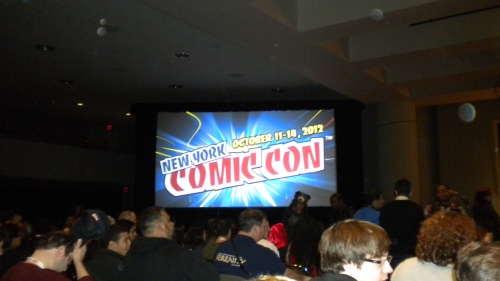 After that, I left the IGN theater and went to visit the booths.  I managed to pick up a surprising number of items.  First, I got a free T-shirt and temporary tatoos at the Tunnel Tail booth after spinning a prize wheel (I’m still not quite sure what Tunnel Tail is).  I visited the Magnet Releasing booth again, and this time I bought a Blu-ray.  For $20, I bought Black Death on Blu-ray (a movie I’ve wanted to see for a long time), and with that purchase I got a free Magnet T-shirt (yesterday I got the yellow one; on Friday I had gotten the black one) and a free regular-sized poster (I went with Hobo With A Shotgun, not realizing that I had already gotten the mini-poster for that yesterday but I’m not disappointed since it’s a great-looking poster).

I found the Mondo booth (which I had almost forgotten about), and after some contemplation, I decided to buy a poster (all of the Mondo posters at NY Comic Con are being sold exclusively there for now).  I bought the Lord of the Rings one featuring the Tower of Barad-Dur with the eye of Sauron on top of it. 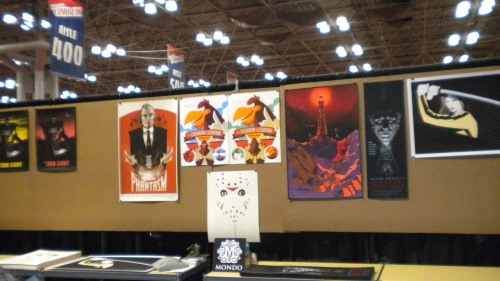 The one I bought is the third one from the right.

I also picked up a couple of free postcards featuring Mondo poster imagery.  I got one for Trick ‘R Treat and The Cabin In the Woods.  When I passed by the Troma booth, Mr. Lloyd Kaufman himself was there signing autographs and posing for pictures. 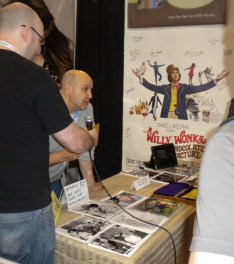 At one of the tables in the Block, I bought a Superman patch that kind of looks like a sheriff’s badge.  It reads ‘City of Metropolis’ on top and ‘Protector’ on the bottom.  I also bought three Superman buttons at the same table.  Also in the Block was Paris Themmen, the actor who played Mike Teevee in 1971’s Willy Wonka and the Chocolate Factory.  He seemed nice.  The last booth I visited was the Dark Horse Comics booth.  I picked up a free mini-poster of “Hellboy In Hell” (actually two copies).  Then I was done for the night.  Overall, another awesome day at NY Comic Con!  I can’t wait to see what’s in store for me on this final day of Comic Con.