In my previous entry (The Films of Tim Burton Part Four), I covered Mars Attacks! and Sleepy Hollow. 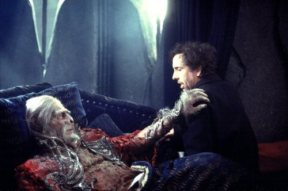 Next up is 2001’s Planet of the Apes.  This was the second Tim Burton film that I got to see on the big screen when it actually came out.  Of course, I would see it on the big screen again two years later at the Museum of the Moving Image as part of the (at that time) complete Tim Burton retrospective.  I remember this film being one of the most highly anticipated films of the summer of 2001, and I would not be disappointed when I saw it.  In fact, it was much better than I had anticipated.  A lot of that was due to the commentary on religion that the film makes (whereas the original 1968 Planet of the Apes engaged in political commentary).  I remember a lot of Apes fans looking for a reason to hate the film; some disliked it because it had action, others claimed to dislike Tim Burton’s style.  Some Apes fans just refused to give it a chance, but none of that stopped its box office success.  I often wonder how many people were secretly bothered by the religious commentary.

Astronaut Leo Davidson (portrayed by a terrific Mark Wahlberg) is an interesting character.  He’s kind of a reluctant hero; he doesn’t “save the day” because he wants to, but because it’ll help him achieve his ultimate goal (leaving the planet).  There are those who might think of him as selfish, but I don’t because I understand his predicament.  If you went to rescue someone and, as a result, ended up in a very, very strange place that seemed upside down to you, you wouldn’t want to stick around for very long, especially if it was a hostile environment.  For him, the planet ruled by apes could’ve been part of a nightmare that he wasn’t waking up from.  The only logical thing to do would be to keep going until his journey reaches a satisfying conclusion.  Once he discovered his role in creating the ape society and that he wouldn’t be able to leave the planet, he finally stepped up as a true leader to help the other humans take a stand against the apes.

What resonates with me the most is the religious commentary.  The ape known as Simos is their version of Jesus.  The ape society was brought up believing a certain doctrine courtesy of Simos and his descendants (there’s even a prophecy about Simos’ return) until Leo finds out the truth about the origins of the ape society.  This eventually culminates in one of my favorite lines from the film where the ape Attar (portrayed by a terrific Michael Clarke Duncan, who unfortunately passed away recently) yells out, “Everything I have believed is a lie!”  I felt the same way when I first realized that Christianity was full of crap (and I was only seven!).  I wonder if someday we’ll ever learn the true origins of the major (older) religions of the world.

Next up is 2003’s Big Fish.  The anticipation for this film was a big deal for me.  It would be the first new Tim Burton film I would see as a college student.  It was also the final film of the Tim Burton retrospective at the Museum of the Moving Image in 2003.  It was a preview screening that I attended with my two best friends, and it was followed by a Q&A with Tim Burton himself!  I actually got to ask him about his collaboration with Danny Elfman on this film, and he said that he had a wonderful experience working with Danny again (Big Fish is the only Tim Burton film so far to get an Oscar nod for Best Original Score).  Burton also mentioned in the Q&A that it was a joy to work from John August’s script and that there was no set release date when shooting started.  After the Q&A, the audience was invited up to the second floor for a preview of the new Tim Burton exhibit (it consisted of framed water color drawings from all of his movies).  It was simple, but it was also freakin’ awesome!

Big Fish is essentially about the art of storytelling and what truths are to be found (or not found) in those stories.  This film was marketed as a modern- day ‘Wizard of Oz,’ but I think that hurt the film more than helped.  I always felt it was much closer to the 1994 Robert Zemeckis film Forrest Gump due to its storytelling technique.  Will Bloom (portrayed by an excellent Billy Crudup) returns home to visit his dying father Edward (portrayed by Albert Finney as the older Edward and Ewan MacGregor as the younger Edward), a man who’s always told tall tales about his life.  Will asks his father to tell him those stories again so that he can figure out who his father really is.  The disconnect between father and son was one I could relate to, except my father never told any wild or remotely exaggerated tales (or even had any adventures).  And I doubt I will ever experience the film’s ending.  I suppose what I take away from the film is that it’s possible for fractured father-son relationships to heal.  I won’t hold my breath, but it is possible.

One response to “The Films of Tim Burton Part Five”